The Atlanta Fed's 2015 Annual Report focused on the graying of the U.S. economy. Part of the report and a follow-up webcast discussed how aging is driving the depletion of the U.S. Social Security and Medicare trust funds.

Based on current projections from the Congressional Budget Office, the Social Security trust fund is forecast to run dry around 2030 (see the chart); the Medicare trust fund in 2025. Barring a change in legislation, once the trust funds are depleted, benefits will be cut so that outlays match revenues. In the case of Social Security, this reduction will mean a 31 percent decline in benefits. To balance the Medicare budget, certain Medicare benefits will also face significant reduction. 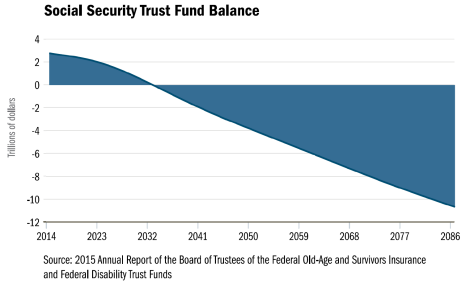 As my coauthors and I explain in a recent Oxford University Press blog post, our research has found that pay-as-you-go programs for retirees such as Social Security and Medicare, on average, make people worse off, whereas means-tested social insurance programs for retirees, such as Medicaid and Supplemental Security Income (SSI), improve welfare.

These findings are based on comparing the welfare of individuals born into economies with different types of social insurance programs available. We find that, given the hypothetical choice between having or not having Social Security, the average individual would choose to be born into an economy without Social Security. However, when we ask if an average individual would prefer to be born into an economy with or without means-tested retiree programs, we find that he or she would strongly prefer the economy with these programs.

The preference for an economy without universal pay-as-you-go programs like Social Security is consistent with findings in the literature more generally. These programs are large (Social Security was 4.9 percent of U.S. gross domestic product [GDP] in 2013) and have distortionary effects. In standard economic models, the distortions lead to such large reductions in savings and labor supply that they tend to outweigh the programs' insurance benefits.

In contrast, means-tested social insurance programs for retirees, such as Medicaid and SSI, are much smaller. Together, outlays from these programs for the elderly were only 1 percent of GDP in 2013. These programs provide transfers only to individuals with limited income and assets or with impoverishing medical expenses. However, it is in these states of world, when one is poor and/or sick, that such transfers are most valuable, which is why we find that these programs improve welfare.

Researchers have found that means-tested transfer programs for working-age individuals are highly distortionary because they implicitly tax income and assets. However, we find that such distortions are less severe for means-tested transfer programs for retirees, since individuals cannot use these programs to finance working-age consumption and medical care.

Our findings suggest that one potential solution to the sustainability problems plaguing Social Security and Medicare may be to make these programs means-tested as well. Under such a system, the government would still provide protection against the risks of ending up old, sick, alone or poor, but with programs that are significantly less costly.

Of course, saying that individuals would prefer to be born into a hypothetical economy A instead of economy B is not the same thing as saying that current U.S. citizens want to make such a transition. Moving from the current system to one in which Social Security and Medicare benefits are means-tested would not be attractive to wealthier individuals who are already retired or on the verge of it. A compensation scheme would likely have to be devised and financed through taxes or government debt.

Once the cost of compensation is taken into account, we may find that such a transition is too costly to undertake. And as the population ages and the ratio of retirees to working-age individuals increases, the fraction of individuals in the economy who need to be compensated will increase further. This reality adds impetus to dealing with the Social Security sustainability issue sooner rather than later.