After the Conference, Another Look at Liquidity

When it comes to assessing the impact of central bank asset purchase programs (often called quantitative easing or QE), economists tend to focus their attention on the potential effects on the real economy and inflation. After all, the Federal Reserve's dual mandate for monetary policy is price stability and full employment. But there is another aspect of QE that may also be quite important in assessing its usefulness as a policy tool: the potential effect of asset purchases on financial markets through the collateral channel.

Asset purchase programs involve central bank purchases of large quantities of high-quality, highly liquid assets. Postcrisis, the Fed has purchased more than $3 trillion of U.S. Treasury securities and agency mortgage-backed securities, the European Central Bank (ECB) has purchased roughly 727 billion euros' worth of public-sector bonds (issued by central governments and agencies), and the Bank of Japan is maintaining an annual purchase target of 80 trillion yen. These bonds are not merely assets held by investors to realize a return; they are also securities highly valued for their use as collateral in financial transactions. The Atlanta Fed's 21st annual Financial Markets Conference explored the potential consequences of these asset purchase programs in the context of financial market liquidity.

The collateral channel effect focuses on the role that these low-risk securities play in the plumbing of U.S. financial markets. Financial firms fund a large fraction of their securities holdings in the repurchase (or repo) markets. Repurchase agreements are legally structured as the sale of a security with a promise to repurchase the security at a fixed price at a given point in the future. The economics of this transaction are essentially similar to those of a collateralized loan.

The sold and repurchased securities are often termed "pledged collateral." In these transactions, which are typically overnight, the lender will ordinarily lend cash equal to only a fraction of the securities value, with the remaining unfunded part called the "haircut." The size of the haircut is inversely related to the safety and liquidity of the security, with Treasury securities requiring the smallest haircuts. When the securities are repurchased the following day, the borrower will pay back the initial cash plus an additional amount known as the repo rate. The repo rate is essentially an overnight interest rate paid on a collateralized loan.

Central bank purchases of Treasury securities may have a multiplicative effect on the potential efficiency of the repo market because these securities are often used in a chain of transactions before reaching a final holder for the evening. Here's a great diagram presented by Phil Prince of Pine River Capital Management illustrating the role that bonds and U.S. Treasuries play in facilitating a variety of transactions. In this example, the UST (U.S. Treasury) securities are first used as collateral in an exchange between the UST securities lender and the globally systemically important financial institution (GSIFI bank/broker dealer), then between the GSIFI bank and the cash provider, a money market mutual fund (MMMF), corporation, or sovereign wealth fund (SWF). The reuse of the UST collateral reduces the funding cost of the GSIFI bank and, hence, the cost to the levered investor/hedge fund who is trying to exploit discrepancies in the pricing of a corporate bond and stock. Just how important or large is this pool of reusable collateral? Manmohan Singh of the International Monetary Fund presented the following charts, depicting the pledged collateral at major U.S. and European financial institutions that can be reused in other transactions. 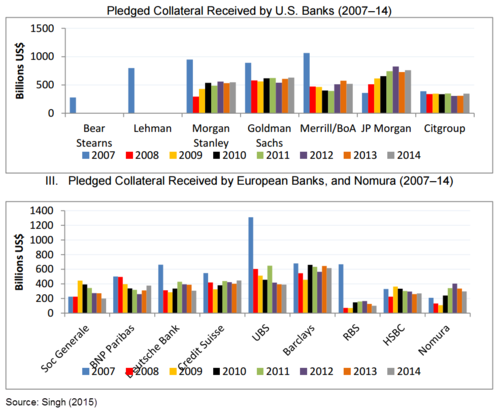 So how do central bank purchases of high-quality, liquid assets affect the repo market—and why should macroeconomists care? In his presentation, Marvin Goodfriend of Carnegie Mellon University concluded that central bank asset purchases, which he terms "pure monetary policy," lower short-term interest rates (especially bank-to-bank lending) but increase the cost of funding illiquid assets through the repo market. And Singh noted that repo rates are an important part of the constellation of short-term interest rates and directly link overnight markets with the longer-term collateral being pledged. Thus, the interaction between a central bank's interest-rate policy and its balance sheet policy is an important aspect of the transmission of monetary policy to longer-term interest rates and real economic activity.

Ulrich Bindseil, director of general market operations at the ECB, discussed a variety of ways in which central bank actions may affect, or be affected by, bond market liquidity. One way that central banks may mitigate any adverse impact on market liquidity is through their securities lending programs, according to Bindseil. Central banks use such programs to lend particular bonds back out to the market to "provide a secondary and temporary source of securities to the financing market...to promote smooth clearing of Treasury and Agency securities."

On June 2, for example, the New York Fed lent $17.8 billion of UST securities from the Fed's portfolio. These operations are structured as collateral swaps—dealers pledge other U.S. Treasury bonds as collateral with the Fed. During the financial crisis, the Federal Reserve used an expanded version of its securities lending program called the Term Securities Lending Facility to allow firms to replace lower-quality collateral that was difficult to use in repo transactions with Treasury securities.

Finally, the Fed currently releases some bonds to the market each day in return for cash, through its overnight reverse repo operations, a supplementary facility used to support control of the federal funds rate as the Federal Open Market Committee proceeds with normalization. However, this release has an important limitation: these operations are conducted in the triparty repo market, and the bonds released through these operations can be reused only within that market. In contrast, if the Fed were to sell its U.S. Treasuries, the securities could not only be used in the triparty repo market but also as collateral in other transactions including ones in the bilateral repo market (you can read more on these markets here). As long as central bank portfolios remain large and continue to grow as in Europe and Japan, policymakers are integrally linked to the financial plumbing at its most basic level.

To see a video of the full discussion of these issues as well as other conference presentations on bond market liquidity, market infrastructure, and the management of liquidity within financial institutions, please visit Getting a Grip on Liquidity: Markets, Institutions, and Central Banks. My colleague Larry Wall's conference takeaways on the elusive definition of liquidity, along with the impact of innovation and regulation on liquidity, are here.