Will the Next Exit from Monetary Stimulus Really Be Different from the Last?

Suppose you run a manufacturing business—let's say, for example, widgets. Your customers are loyal and steady, but you are never completely certain when they are going to show up asking you to satisfy their widget desires.

Given this uncertainty, you consider two different strategies to meet the needs of your customers. One option is to produce a large quantity of widgets at once, store the product in your warehouse, and when a customer calls, pull the widgets out of inventory as required.

A second option is to simply wait until buyers arrive at your door and produce widgets on demand, which you can do instantaneously and in as large a quantity as you like.

Thinking only about whether you can meet customer demand when it presents itself, these two options are basically identical. In the first case you have a large inventory to support your sales. In the second case you have a large—in fact, infinitely large—"shadow" inventory that you can bring into existence in lockstep with demand.

I invite you to think about this example as you contemplate this familiar graph of the Federal Reserve's balance sheet: 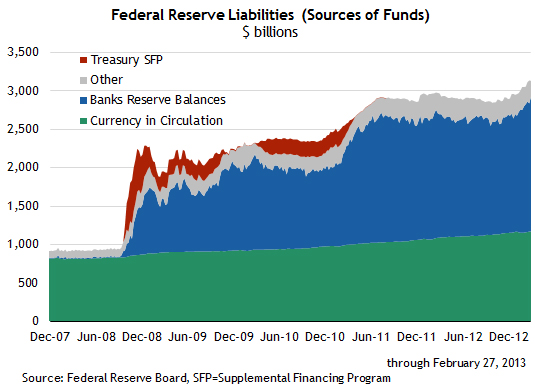 I gather that a good measure of concern about the size of the Fed's (still growing) balance sheet comes from the notion that there is more inherent inflation risk with bank reserves that exceed $1.5 trillion than there would be with reserves somewhere in the neighborhood of $10 billion (which would be the ballpark value for the pre-crisis level of reserves).

I understand this concern, but I don't believe that it is entirely warranted. My argument is as follows: The policy strategy for tightening policy (or exiting stimulus) when the banking system is flush with reserves is equivalent to the strategy when the banking system has low (or even zero) reserves in the same way that the two strategies for meeting customer demand that I offered at the outset of this post are equivalent.

The reason is that when the FOMC sets a target for the federal funds rate, it is sending very specific instructions to the folks from the Open Market Desk at the New York Fed, who run monetary policy operations on behalf of the FOMC. Those instructions are really pretty simple: If you have to inject more bank reserves (and hence expand the size of the Fed's balance sheet) to maintain the FOMC's funds rate target, do it.

To make sense of that statement, it is helpful to remember that the federal funds rate is an overnight interest rate that is determined by the supply and demand for bank reserves. Simplifying just a bit, the demand for reserves comes from the banking system, and the supply comes from the Fed. As in any supply and demand story, if demand goes up, so does the "price"—in this case, the federal funds rate.

In our hypothetical example, the Open Market Desk has been instructed not to let the federal funds rate deviate from 3 percent—at least not for very long. With such instructions, there is really only one thing to do in the case that demand from the banking system increases—create more reserves.

To put it in the terms of the business example I started out with, in setting a funds rate target the FOMC is giving the Open Market Desk the following marching orders: If customers show up, step up the production and meet the demand. The Fed's balance sheet in this case will automatically expand to meet bank reserve demand, just as the businessperson's inventory would expand to support the demand for widgets. As with the businessperson in my example, there is little difference between holding a large tangible inventory and standing ready to supply on demand from a shadow inventory.

Though the analogy is not completely perfect—in the case of the Fed's balance sheet, for example it is the banks and not the business (i.e., the Fed) that hold the inventory—I think the story provides an intuitive way to process the following comments (courtesy of Bloomberg) from Fed Chairman Ben Bernanke, from last week's congressional testimony:

The Monetary Policy Report that accompanied the Chairman's testimony contained a fairly thorough summary of costs that might be associated with continued monetary stimulus. Some of these in fact pertain to the size of the Fed's balance sheet. But, as the Chairman notes in the video clip above, when it comes to the mechanics of exiting from policy stimulus, the real challenge is the familiar one of knowing when it is time to alter course.

By Dave Altig, executive vice president and research director of the Atlanta Fed