Since it is indisputably the policy question of the moment, here are a few of my own observations regarding the "fiscal cliff." Throughout, I will rely on the analysis of the Congressional Budget Office (CBO), as reported in the CBO reports titled An Update to the Budget and Economic Outlook: Fiscal Years 2012 to 2022 and Economic Effects of Policies Contributing to Fiscal Tightening in 2013.

Since the CBO analysis and definitions of the fiscal cliff are familiar to many, I will forgo a rehash of the details. However, in case you haven't been following the conversation closely or are in the mood for a refresher, you can go here first for a quick summary. This "appendix" also includes a description of the CBO's alternative scenario, which amounts to renewing most expiring tax provisions and rescinding the automatic budget cuts to be implemented under the provisions of last year's debt-ceiling extension.

On, then, to a few facts about the fiscal cliff scenario that have caught my attention.

1. Going over the cliff would put the federal budget on the path to sustainability.

If reducing the level of federal debt relative to gross domestic (GDP) is your goal, the fiscal cliff would indeed do the trick. According to the CBO:

Budget deficits are projected to continue to shrink for several years—to 2.4 percent of GDP in 2014 and 0.4 percent by 2018—before rising again to 0.9 percent by 2022. With deficits small relative to the size of the economy, debt held by the public is also projected to drop relative to GDP—from about 77 percent in 2014 to about 58 percent in 2022. Even with that decline, however, debt would represent a larger share of GDP in 2022 than in any year between 1955 and 2009.

Such would not be the case should the status quo of the CBO's alternative scenario prevail. Under (more or less) status quo policy, the debt-to-GDP ratio would rise to a hair under 90 percent by 2022: The current debt-to-GDP ratio of 67 percent is already nearly double the 2007 level, which checked in at about 36 percent. However, though the increase in the debt-to-GDP ratio over the past five years is smaller in percentage terms, a jump to 90 percent from where we are today may be more problematic. There is some evidence of "threshold effects" that associate negative effects on growth with debt levels that exceed a critical upper bound relative to the size of the economy. At the Federal Reserve Bank of Kansas City's 2011 Economic Symposium, Steve Cecchetti offered the following observation, based on his research with M.S. Mohanty and Fabrizio Zampolli:

Using a new dataset on debt levels in 18 Organisation for Economic Co-operation and Development (OECD) countries from 1980 to 2010 (based primarily on flow of funds data), we examine the impact of debt on economic growth....

Our results support the view that, beyond a certain level, debt is bad for growth. For government debt, the number is about 85 percent of GDP.

Of course, causation is always a tricky thing to establish, and Cecchetti et al. are clear that their estimates are subject to considerable uncertainty. Still, it is clear that the fiscal cliff moves the level of debt in the right direction. The status quo does not.

2. The fiscal cliff moves in the direction of budget balance really fast.

By the CBO's estimates, over the next three years the fiscal cliff would reduce deficits relative to GDP by about 6 percentage points, from the current ratio of 7.3 percent to the projected 2015 level of 1.2 percent.

Deficit reduction of this magnitude is not unprecedented. A comparable decline occurred in the 1990s, when the federal budget moved from deficits that were 4.7 percent of GDP to a surplus equal to 1.4 percent of GDP. However, that 6 percentage point change in deficits relative to GDP happened over an eight-year span, from 1992 to 1999.

It is probably also worth noting that the average annual rate of GDP growth over the 1993–99 period was 4 percent. The CBO projects real growth rates over the next three years at 2.7 percent, which incorporates two years of growth in excess of 4 percent following negative growth in 2013.

The upshot is that, though the fiscal cliff would move the federal budget in the right direction vis à vis sustainability, it does so at an extremely rapid pace. I'm not sure speed kills in this case, but it sounds pretty risky.

3. The fiscal cliff heavily weights deficit reduction in the direction of higher taxation.

Over the first five years off the cliff, almost three-quarters of the deficit reduction relative to the CBO's no-cliff alternative would be accounted for by revenue increases. Only 28 percent would be a result of lower outlays: 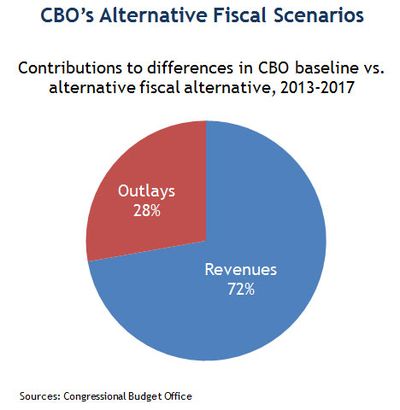 The balance shifts only slightly over the full 10-year horizon of the CBO projections, with outlays increasing to 34 percent of the total and revenues falling to 66 percent.

Particularly for the nearer-term horizon, there is at least some evidence that this revenue/outlay mix may not be optimal. A few months back, Greg Mankiw highlighted this, from new research by Alberto Alesina, Carlo Favero, and Francesco Giavazzi:

This paper studies whether fiscal corrections cause large output losses. We find that it matters crucially how the fiscal correction occurs. Adjustments based upon spending cuts are much less costly in terms of output losses than tax-based ones. Spending-based adjustments have been associated with mild and short-lived recessions, in many cases with no recession at all. Tax-based adjustments have been associated with prolonged and deep recessions.

Of course, that in the end is a relatively short-run impact. It does not directly confront the growth aspects of the policy mix associated with fiscal reform. Controversy on the growth-maximizing size of government and the best growth-supporting mix of spending and tax policies is longstanding. The dustup on a Congressional Research Services report questioning the relationship between top marginal tax rates and growth is but a recent installment of this debate.

Here's what I think we know, in theory anyway: Government spending can be growth-enhancing. Tax increases can be growth-retarding. It's all about the tradeoffs, the details matter, and unqualified statements about the "right" thing to do should be treated with suspicion. (If you are an advanced student of economics or otherwise tolerant of a bit of a math slog, you can find an excellent summary of the whole issue here.)

In other words, there are lots of decisions to be made—and it would probably be better if those decisions are not made by default.

By Dave Altig, executive vice president and research director at the Atlanta Fed

Has the COVID-19 Pandemic Affected Demand for Office Space?