How Big Is the Output Gap? More Perspectives from Our Business Inflation Expectations Survey

Opinions vary widely about how much slack there is in the economy these days. Some say a lot—some say not so much.

Last month, we reached out to members of our Business Inflation Expectations (BIE) panel for their take on the issue. The panel indicated they had more pricing power in August than they did last October. OK, that doesn't exactly gauge the amount of slack businesses think they have, but it does suggest that, however much slack there is, it's been shrinking.

Another detail revealed by our August inquiry was that retailers think they have more pricing power compared with manufacturers—a pretty good sign the latter is experiencing more slack than the former.

In this month's BIE survey we went fishing in the same murky waters, but this time we took a more direct approach. We asked our panel to provide a percentage estimate of how far their sales levels are above/below "normal." Here's what we found: On a gross domestic product (GDP)–weighted basis, the panel estimates that current sales are about 7.5 percent below normal. That's more slack than the conventional estimates, like the Congressional Budget Office's (CBO) measure of the GDP gap, which puts the economy about 6 percent under its potential. 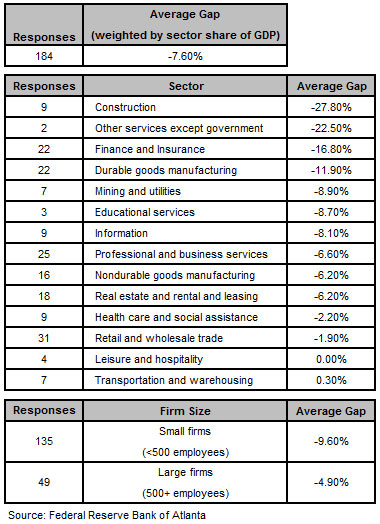 But perhaps a more interesting observation from our September survey is how widely current performance varies by sector and size within our panel. Retailers, for example, say their current sales are a little less than 2 percent below normal. And firms in the leisure/hospitality and the transportation/warehousing sectors—sectors where growth has been particularly robust in recent years—say they are operating at, or just a shade above, normal levels.

Compare these estimates with those from durable goods manufacturers, which report that their current sales levels are nearly 12 percent below normal, and finance and insurance companies, which say they are almost 17 percent below normal. And construction firms? Well, best not even ask them.

And the amount of slack firms are reporting isn't just a reflection of their sector of the economy—size also matters. Firms with more than 500 employees say their current sales levels are a little less than 5 percent below normal—half as much as the amount of slack being reported by small firms.

So we're led back to the question that kicked this blog post off. How big is the output gap? Some say a lot—some say not so much. And this difference in perspective is not just among policymakers. Within the economy, experience varies at least as widely; some firms' sales are still well below normal, while others are telling us that they are very nearly back to normal, and some are already there.

But here's the rub. If the economy represents a constellation of firms operating at widely varying levels of capacity, from what viewpoint should we consider the economy relative to its potential? Are aggregate measures, like the one provided by the CBO or by our "GDP-weighted" approach, appropriate perspectives? Indeed, given widely varying measures of economic performance across firms and industries, how meaningful is an aggregate assessment of economic slack?

Ah, we'll leave these questions for the November survey.

Nicholas Parker, economic research analyst, all with the Atlanta Fed