As the G20 meets and debates issues of inflation and global imbalances, China's central bank is again on the move. From Reuters:

"China on Friday raised required reserves to a record 19.5 percent, adding to an increasingly aggressive effort by Beijing to stamp out stubbornly high inflation.

"Over the past four months, China has also raised interest rates three times and ordered banks to issue fewer loans in an attempt to make sure it can meet a 2011 inflation target of 4 percent."

Though rising food prices are indicted in a good many discussions of emerging market inflation these days, it is not just food, the article notes:

"Soaring food costs have driven Chinese inflation, rising 10.3 percent in the year to January and accounting for nearly three-quarters of the jump in overall prices.

"But pressures have been broadening. Non-food inflation, long subdued, rose at its fastest pace in more than a decade in January."

The Reuters piece, in my opinion, also hits on the key issue:

"Excess cash in the economy, stemming from China's trade surplus, is a root cause of fast-rising prices, prompting the central bank to use reserve requirements to lock up a bigger share of deposits and thereby slow money growth." The real exchange rate—which, in effect, measures the value in trade of Chinese goods and services for U.S. goods and services—is rising and has been more or less continuously for some time. It is not so apparent that the real exchange rate is being systematically manipulated or controlled, and in fact there is good reason to claim that it is not (or at least not via monetary policy). Real exchange rates are about the demand and supply of real resources—things that are not over time controlled by manipulating the money supply. That reality is suggested by evidence cited in the Economist article:

"Conventional wisdom says that a stronger yuan would reduce China's current-account surplus. Yet the empirical support for this is weak. In a paper published in 2009, Menzie Chinn of the University of Wisconsin and Shang-Jin Wei of Columbia University examined more than 170 countries over the period 1971-2005, and found little evidence that countries with flexible exchange rates reduced their current-account imbalances more quickly than countries with more rigid regimes."

But if printing money does not buy you control over real stuff, it is very definitely a factor in controlling the nominal exchange rate—a measure of the value in trade of currency for currency. And there, I believe, is the crux of the problem. To keep the nominal exchange rate from rising, the People's Bank of China in effect prints yuan and buys dollars. Though this has limited impact on any real fundamentals, it is the source material for inflation. In fact, if a monetarist heart beats within you, the picture of the recent Chinese inflation experience will surely warm it: 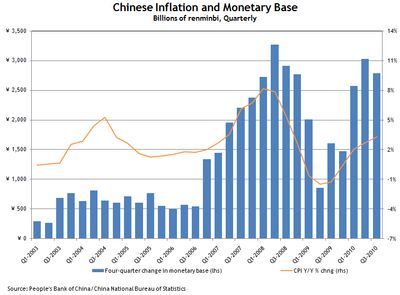 "The renminbi is undervalued. … It would be both in our interest and in the Chinese interest for them to raise the value of their currency. And it would help them with their inflation problem."

Today he put forward a similar sentiment, though not mentioning China by name.

Of course, the astute and skeptical among you might ask, if the money-to-inflation nexus is relevant to China, why not the United States? A fair question, one that I will take on another day.